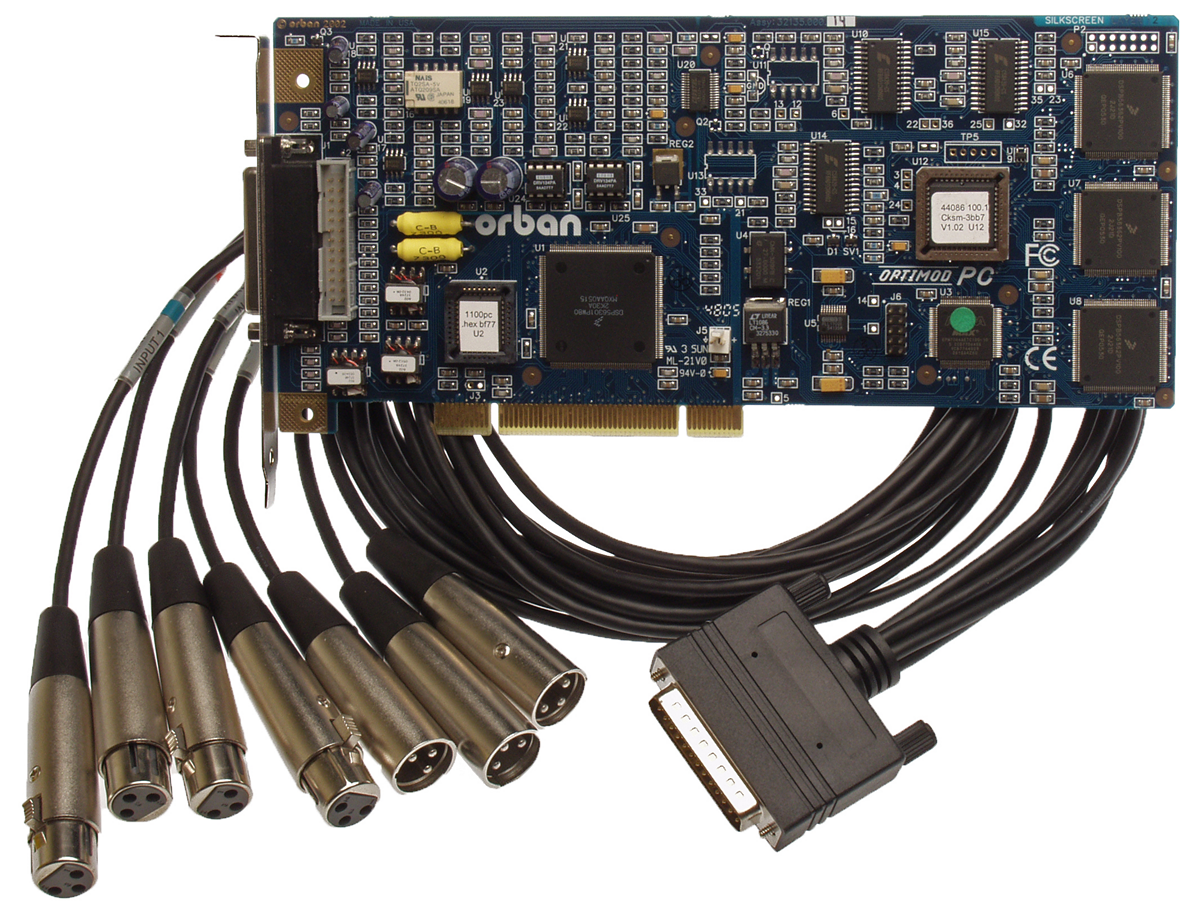 Listing comprises card and XLR breakout cable. No other documents, cables or accessories are included. This card has been tested with the V2 driver software running under Windows 10 64 Bit to confirm compatibility and correct oprtation. I can send the drivers to the buyer electronically if required or they can be downloaded from ftp://ftp.orban.com/1100/. Note that I may substitute the later PC1101 breakout cable in lieu of the PC1100 cable shown, as the pinouts are the same. In this case there will be three unused connectors which can be ignored for the moment but which may be useful in the future if you decide to upgrade to the later version of the card. 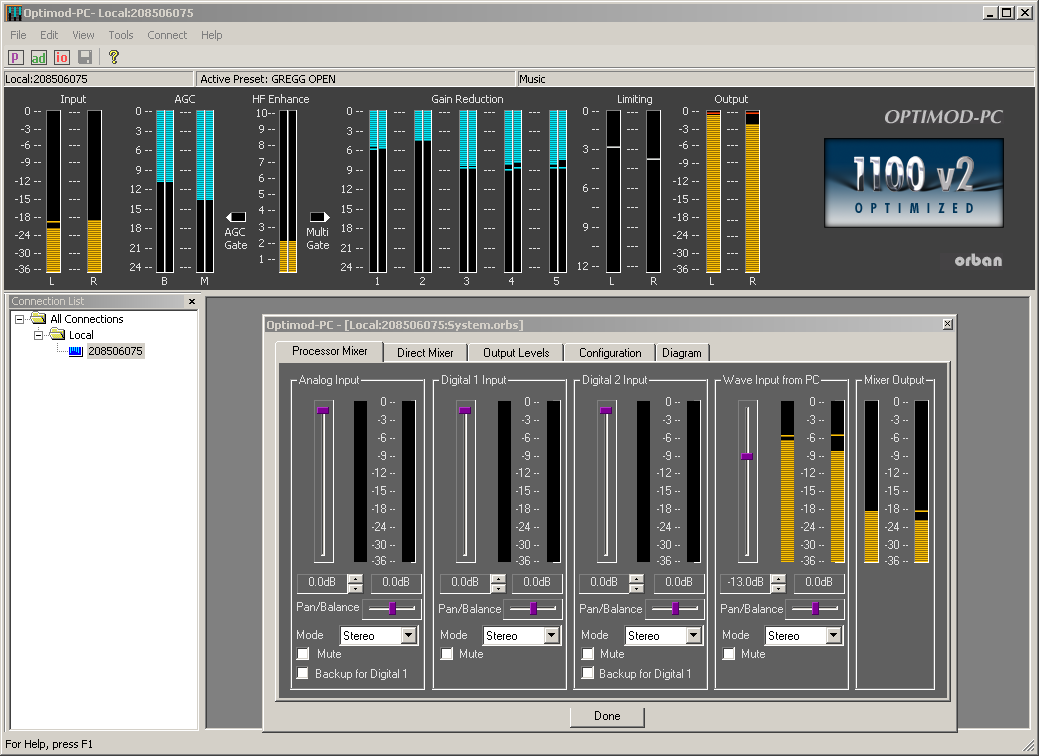 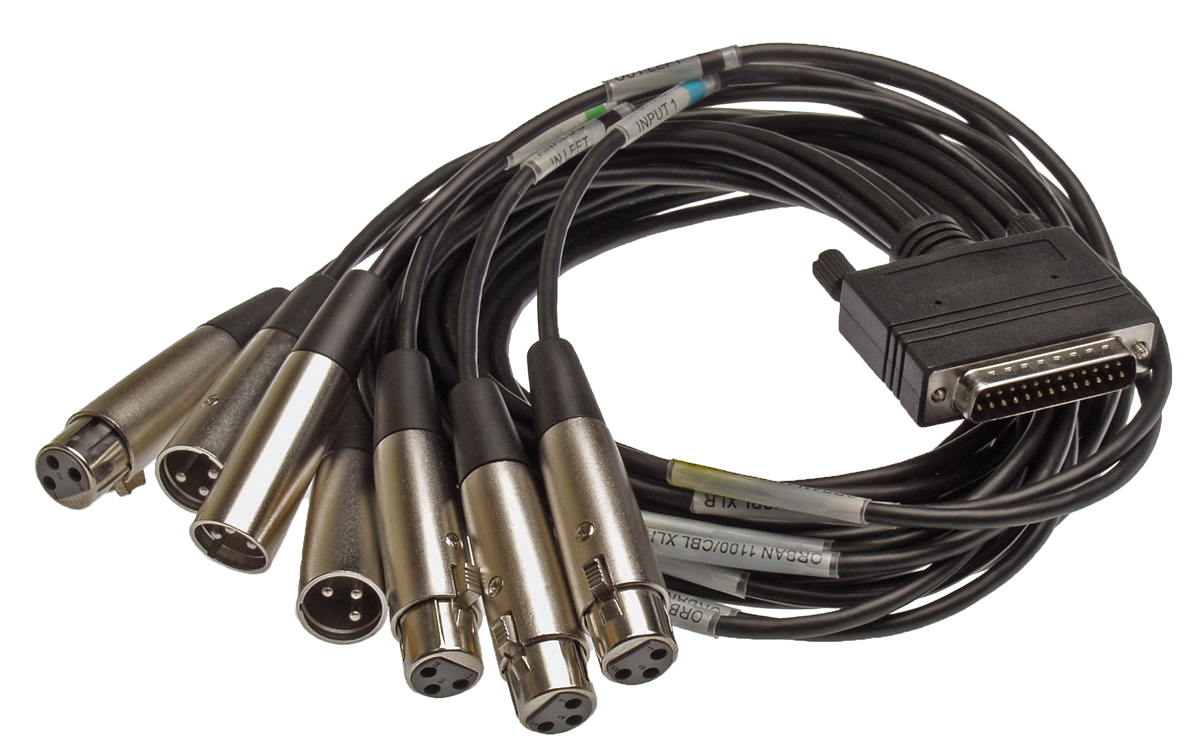 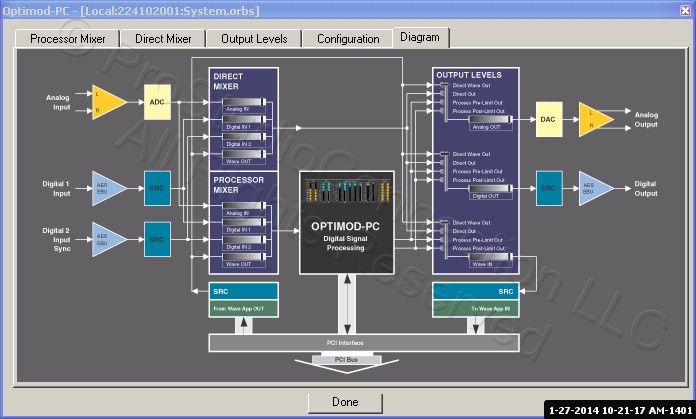 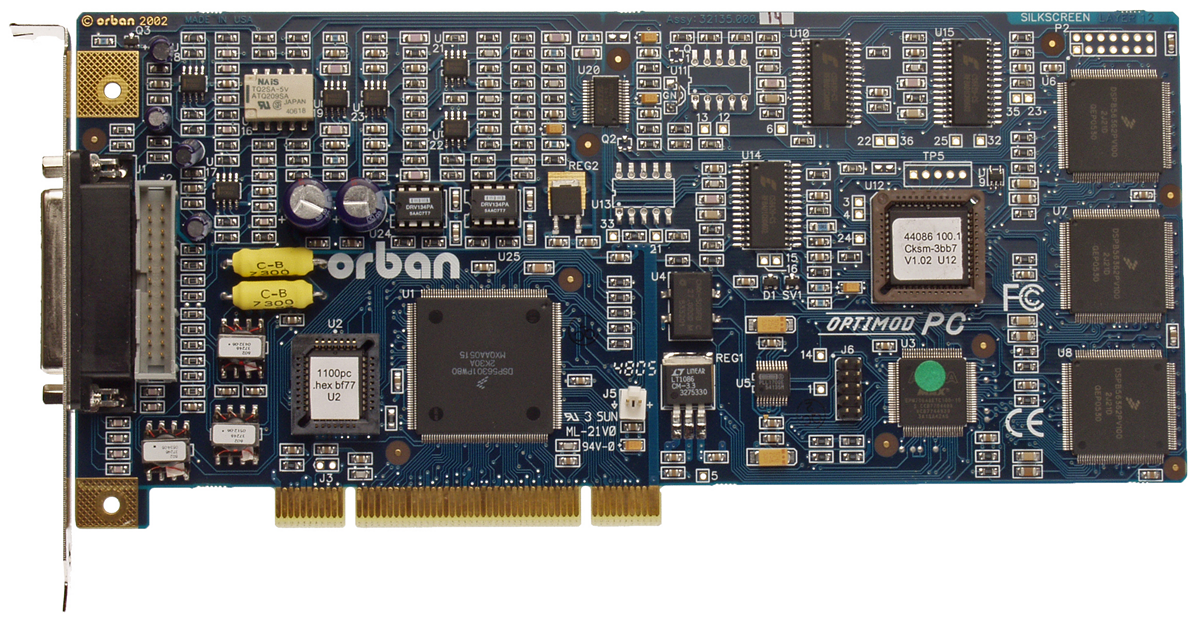 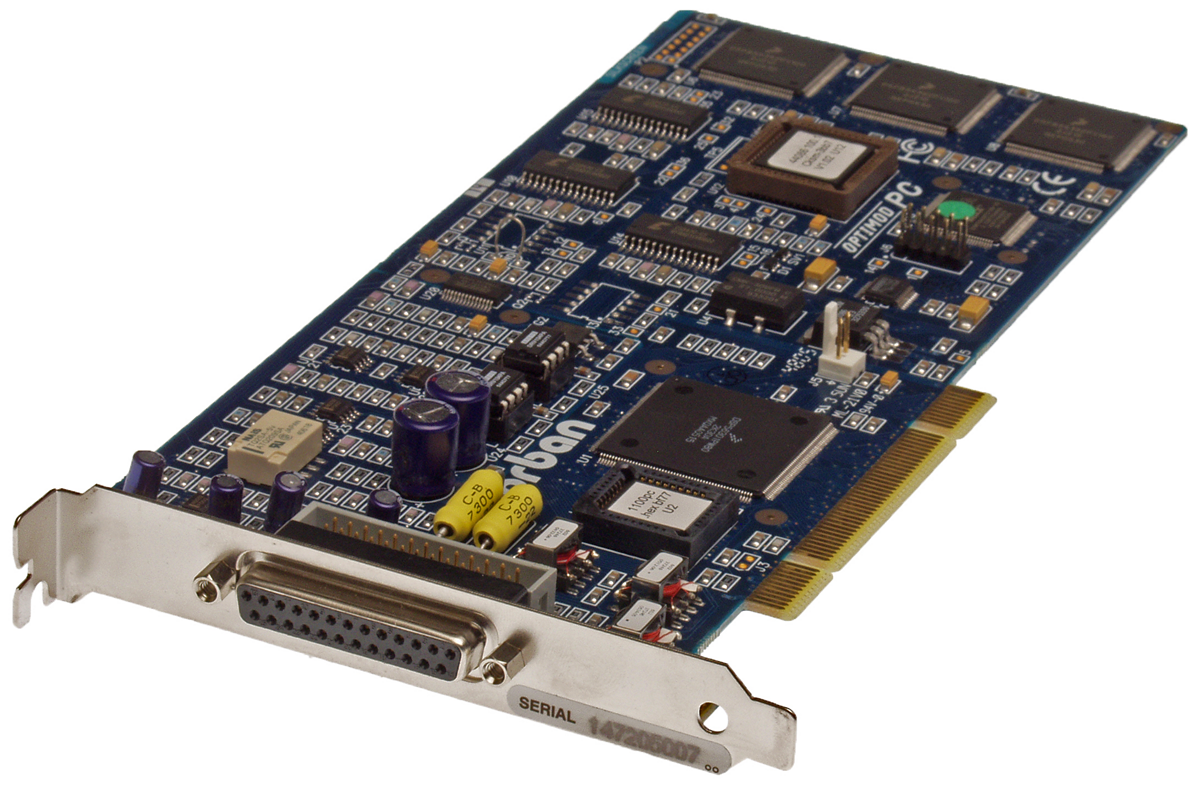 Note that this output is primarily for monitoring. Nevertheless, it has been designed for low noise, distortion, and overshoot and can drive an STL or transmitter in an analog plant. Peak control will not be as good as at the digital output because transmitted samples will be asynchronous with peak-controlled internal samples. The source of this output is switchable between the peak limiter output and the multiband compressor output. Because most of the delay occurs in the peak limiter, this can make headphone monitoring much more comfortable for live talent when live microphone inputs are used.
Number of Outputs: 1
Configuration: Stereo.
Source Impedance: 50 ohm, electronically balanced and floating.
Load Impedance: 600 ohm or greater, balanced or unbalanced. Termination not required or recommended.
Output Level: +4dBu nominal; adjustable in software. Clip level is +18dBu unbalanced, +24dBu balanced.
Signal-to-Noise: 90dB unweighted signal-to-noise, 20Hz-20kHz (bypass mode).
Distortion: <0.01% THD (bypass mode), 20Hz-20kHz.
DA Conversion: 24-bit 128X oversampled D/A with linear phase anti-aliasing filter.
DC Offset: Less than 10mV differential offset.
Highpass Filter: 0.15 Hz.
Connector: DB-25, EMI suppressed. 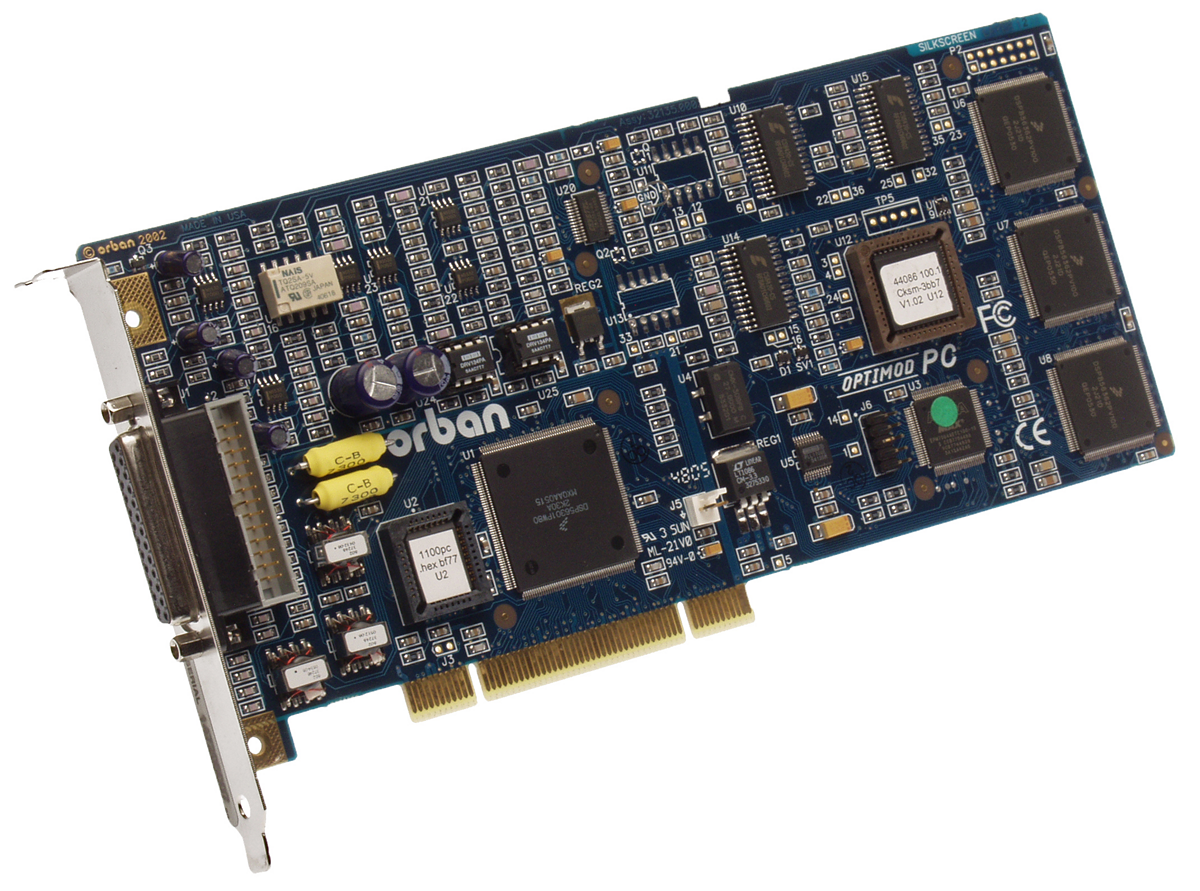 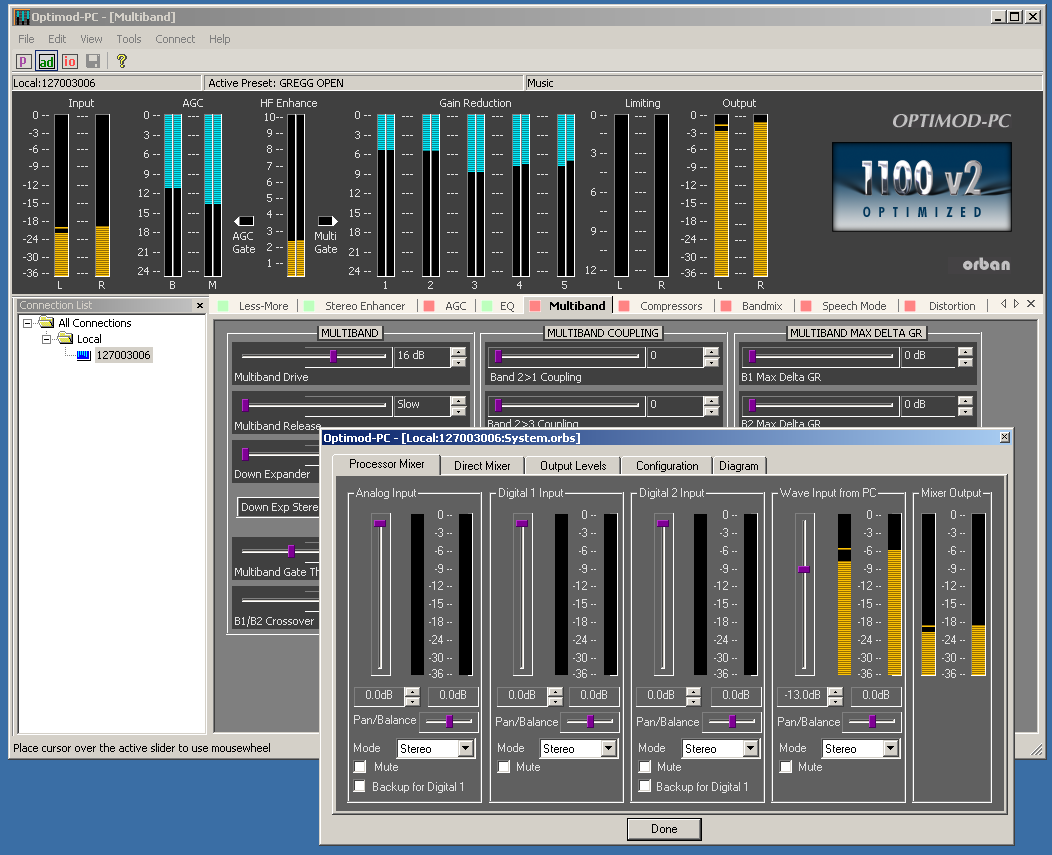 Number of Outputs: 1
Configuration: Two-channel per AES/EBU-standard (AES3-1992) or S/PDIF (consumer) standard, selectable in software.
Output Level Control: Peak level is adjustable from -20 to 0dBFS in 0.1dB steps. Controlled by software.
Sample Rate: Internal free running at 32kHz, 44.1kHz, or 48kHz, selected in software. Can also be synced to either AES/EBU input at 32kHz ±4%, 44.1kHz ±4%, or 48kHz ±4%.
Word Length: Selectable 24, 20, 18, or 16-bit. Optional dither can be added, with level adjusted appropriate to word length. This is first-order noise-shaped dither. (i.e., white TPDF dither of peak amplitude equal to the quantizer step size with noise shaping spectral density of 6dB/octave.) It sounds substantially quieter than white triangular PDF dither but, in contrast to more extreme noise-shaped dither, it adds only 3dB unweighted noise by comparison to white PDF dither.
Sync: Internal free running or external. Either AES/EBU input can be used as source for external sync.
Jitter: Less than 10ns rms.
Internal Output: The card is equipped with a driver that allows it to look like a standard sound card to the operating system (Windows or Linux). The output can therefore be routed to software running on the host system and/or the card outputs via the Mixer Application described under Internal Input, above.
Connector: DB-25, EMI suppressed.